My name is all about bridges. So I like bridges. I wonder if people with other nouns in their names feel like this. I like visiting bridges and walking on them and driving over them, even when they are terrifying like the Calcasieu River Bridge down in Lake Charles, Louisiana, which admittedly I only rode over in a car one time, and I was a passenger. Google it.

I like what bridges are. Spans that connect two unconnectable places. Places that would otherwise have to be brought together by boat or some round about detour are brought together by bridges. They bring us together. They strengthen bonds. They are symbols of peace and freedom and openness.

In Cape Girardeau, there was a bridge to Illinois built in 1927, before even our Chain of Rocks Bridge up here in St. Louis. It was a narrow little bridge, only 20 feet across. When it was 60 years old, it was known that it needed replacing. But the new bridge didn't get put in place until 2003.

It was the route to Bixby's parents' place. Down to Cape Girardeau on I-55, through the city, and across that bridge. That narrow little thread across the Mississippi, sharing the space with 18-wheelers and locals who didn't bat an eye crossing it.

It got terrifying. The bridge was unstable and needed to go. Work began on the new bridge, but I stopped taking the old one. I'd go all the way down to Sikeston and cross on the I-57 bridge. A little more time but I had started having obsessive thoughts about crashing into the water in my minivan and my mental health was more important than the 20 minutes I'd save.

They built a new bridge, a beautiful modern thing that they light up at night. We cross now and a few minutes later my kids ask if we've crossed into Illinois yet. It is perfect, as river bridges go. Wide and well-lit and 4 lanes, divided.

They blew up the old bridge, a bit north of the new. Today Bixby and I ran some errands for my mother-in-law, and while we were over there, we went to the park that sits where the old bridge's gaping maw used to open on the Cape side.

I stood and took this picture at the end of the old span, now an observation deck. 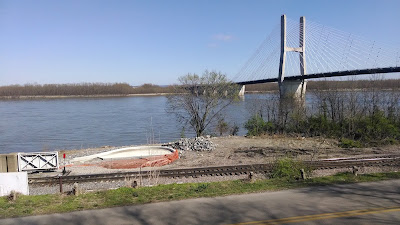 I could see the dent in the tree line where the old bridge used to land on the other side. Trash trees are growing up fast in the flood plain but even 13 years later there's still that dent.

The new bridge stands happily there to the right, to the south, doing the same job its predecessor once did for so long: connecting.

The past year or so, a lot of my bridges disappeared. Some were unstable and in need of destruction. Others were pulled out from under me.

I've been a little stranded.

I'll always be able to see that scar in the tree line from where those old bridges stood.

But I'll happily cross the new ones and reconnect.
Posted by Sally Bridge at 10:25 PM