I am from, and currently live in, St. Louis. Two nights ago our long-suffering St. Louis Blues hockey team won the Stanley Cup, which is the National Hockey League championship. We haven't won it in the entire history of the franchise. We haven't been to the finals since 1970--we were in it the first 3 years of our history, as essentially the best of the worst. Back in 1967 when the league expanded, they stuck all the new teams in the western division. We were the winners of the western division title, and then got thoroughly pummeled in 4 game series (those would be best of 4's) each time.

And we never got to go back. We would often make it into the playoffs, but never to the final.

The Blues are our "other" professional sports team, of course. We have the St. Louis Cardinals baseball team, which wins a World Series every decade or so, with 11 won in our history. We have a loyal fanbase, and I will go ahead and say our fans are classy, usually well-mannered, and convivial. The Blues fan is typically a whiter, rougher individual, although ticket prices have risen to the point that many fans no longer have those nosebleed season tickets in the old "Barn," the Arena that used to be the Blues' home ice.

I went to three home games this year, more than I've been to since the 1980s. I was even at a 6-1 loss to the Canucks that led to a fight at the next Blues' practice. Like two of our players fighting each other on the ice. A new low. They were last by January and then somehow things started to turn around. I watched the playoff series vs. the Dallas Stars and the San Jose Sharks and they were riveting even on my little computer screen propped up on the ottoman.

We lost game 1 to the Bruins, a team many hockey fans hate even when their team isn't playing them. But then we won game 2, the first Stanley Cup final game we'd ever won. Lost game 3, won game 4. Won game 5. We were home for game 6, where we could have taken the championship, but we lost it, and badly. We weren't playing well and it felt like it was slipping through our fingers.

Back in Boston, game 7, and we reigned all over that ice. It was clean hockey, too--only one penalty all game, and that was for delay of game, not tripping or high sticking or anything aggressive. Boston couldn't keep up with us. And they lost. At home. 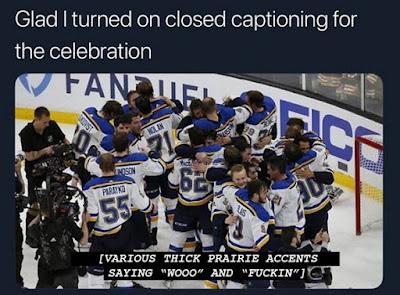 That must have sucked, being on your home ice waiting for the mandatory gentleman's handshake while the Blues' bench empties and gloves scatter and everyone goes out to hug the rookie goalie who just won his 16th playoff game, beating a record.

And then the cameras caught Brad Marchand of the Bruins starting to cry. The same Marchand who had taunted and made crying gestures with his hands at the Blues when they lost a game earlier in the series. The same Marchand who is famous for his dirty play, including tripping players from behind and ducking down to hit players in their torsos, knocking them off balance. He's been censured, fined, and benched for his techniques.

Back in the locker room, they interviewed the Bruins players. Patrice Bergeron said, "You know, we ultimately didn’t capitalize on our chances and they did. You know, we got to give them credit. They deserved to win, but it’s not going to change the way we’ve competed and the way that we’ve battled to get to this point, but then, it doesn’t change the result whatever we say right now."

That is a typical loser-of-the-big-game speech. We both gave our best but they got the better of us. It happens. It hurts and it sucks but they deserve the win. I've heard baseball players, basketball coaches, all kinds of sports players and managers say those words.

Marchand said, "You know, they just took our dream, our lifetime dream from us, and everything we’ve worked for our entire lives. It was 60 minutes away from that. You can’t describe it."

We took their dream.

Marchand and the Bruins won the Cup in 2011. It was the Blues' first win. Not only that, but no player on the Blues had ever won. The Blues were in last place in January. They had an interim coach and a rookie goalie and a bunch of players dumped by other teams. They were fighting each other during practice in December. Then they turned it around and started to play good hockey. This is their Cinderella story, Marchand, this is St. Louis' Cinderella story. While I'm sure it would have been epic to get your second ring on home ice and celebrate instead of sitting empty hearted in the locker room...the Blues didn't take your dream.

We didn't take your dream, Marchand, because it wasn't your dream. You were playing in our dream this year.
Posted by Sally Bridge at 6:58 PM 2 comments: