Texas is a rebirth. Texas is deciding that I am going to be from here and that's right, you're not from Texas, but Texas wants you anyway.

Texas is a biker ice house where Jason and I duck in when his jeep breaks down and then both of us taking a step back because wait, we are going to get hurt here. We are going to get raped and killed here. But no. The skinny lady with the hair wider than her shoulders asks us, him in baseball pants and me in a uniform skirt, if she can help us. And she does.

Texas is a pond outside a friend's house and how on earth did we all wind up without our clothes on.

It is a narrow two lane unpainted road, often with standing water, as my route to school every day.

It is quitting my first job after one night.

It is my sister getting bit by a dog and holding her in the front seat of the car as my father runs red lights to get to the hospital. We never ever went to the hospital. I pretty much figured she was going to die. I'm only kind of kidding.

Texas is prom and first real boyfriends and several fake ones. Texas is having to call my dad for permission for the barber to cut off all my hair when I'm 17.

Texas is being too smart for my own good and knowing it. And flaunting it. It is being my high school's first and only National Merit Scholar. I know because it doesn't exist anymore.

Texas is like that. Everything is new. Hurricanes and black mold wipe it all out over time. It is constantly churning. Obliterating.

Texas is a rodeo. It is a train to Galveston. It is a sunburn that blisters. It is piercing my own ear. Twice. With a safety pin.

Texas is making friends with adults for the first time. And friends with people who don't speak my language in their homes. Or have my skin color. Or my gender. Or my socioeconomic class. Texas is about a level playing field.

Texas is a retreat outside San Antonio where a group of us gets lost in a snipe hunt gone wrong and then Joe has to hit Matt. Texas is so many red ant bites you have scars around the tops of your ankles after the retreat.

Texas is sitting bitch in a truck between him and his girlfriend and trying to figure out how to change this fact. And not really changing it, but on the way back, it's just the two of us because she's mad at him because, see above, snipe hunt.

Texas is riding in so many trucks with boys. And driving a 15 passenger van up over a sidewalk to get away from bad men on yet another retreat. Texas is dancing with a boy at a bar to a song about drinking yourself to death. While on retreat. Texas is getting felt up on retreat. Perhaps Texas is bad at retreats.

Texas is saying goodbye at graduation and seriously never seeing any of them ever again. Not even him.

Texas is a summer job at Wal*Mart and my father's advice ringing in my ears: life looks better through a classroom window than from behind a lathe.

Texas is a bus trip with people I hardly know, going to a conference so far away. It is stopping at a truck stop in Amarillo and being jerks.

Texas is many, many Dairy Queens. And Whataburgers. And Waffle Houses. And Steve Earl's song Telephone Road.

Texas is walking down the beach on Galveston Island and down in Freeport. It is the dirtiest ocean you've ever been to and it's mine. Texas is a day after a storm and so many shark eye moonsnails.

Texas is a bag of sourballs and a fatherless boy and truths spoken when we are too young to handle them. Tangerine sourballs. I can still feel the pain in the corner of my mouth when I think about it.

Texas is a 1974 Triumph Spitfire driven down 288 to the theme song of "The Prisoner".

Texas is all my speeding tickets.

Texas is buying a german army coat at an army surplus store on Galveston when I realize I'm going to stay in St. Louis after all.

Texas is belonging to something just by opting in. Texas doesn't have unwritten rules to break. Texas don't care. Texas wants you to sit at the table.

Texas is voting on the theme from the "Jeffersons" for our high school class song and being vetoed. It is being valedictorian and not being allowed to say the speech at graduation. It is playing soccer on the boys team. It is about not fitting the mold, but not getting killed for it either. It is learning to love being the underdog. Even though it often doesn't work out.

Texas is having school colors of shit brown and white and liking it anyway.

Texas is being a witness to a crime. It is watching a group of men in the middle of the night dump a body in a ditch and having a sheriff blow it off.

It is the first time I spoke truth to power. And got an eraser thrown at me by a teacher from across the classroom.

Texas is a Saturday detention for skipping French III. And being glad about it.

Texas is getting home well after curfew and it is still above 90 degrees in the middle of the night. It is sneaking into and out of the house. It is a fight at my brother's graduation party that resulted in the cops being called.

Texas is coming home and sleeping on my parents' couch for a summer while I figure out what the hell I'm going to do next.

Texas is realizing I'm not as brave as I'd like to think, but also not as cold-hearted as everyone else seems to like to think.

Texas is digging a grave for a german shepherd and getting chinaberry tree droppings all over me. It is catching this combination of sweat and dirt on my skin that I can't wait to scrub off, that smells like my father's family, realizing that I cannot fight genetics, as hard as I try, so perhaps I'd best embrace them.

Texas is lying on the back of my car in his driveway, staring up at the orange sky of Pasadena, and waiting for the owl to silently fly over. Like it did every night we waited for it.

Texas is saying yes at a barbecue joint and saying no in my parents' driveway. Texas is walking away forever from something that isn't good for me, even if it's been fun.

Texas is visiting my brother and his girlfriend and their new baby, with my own baby, and then having mine get croup while I'm visiting and then spend a day in a Spanish-speaking clinic where they think I'm there to get her ear tag removed. Muy linda, they kept saying. Yes, I know she's pretty. But she can't breathe.

Texas is that same brother playing me Robert Earl Keen songs. It is my realization that I am crowding the fuck out of him. It is deciding that I have to be easy. And it is visiting him again many years later and everyone is easy. 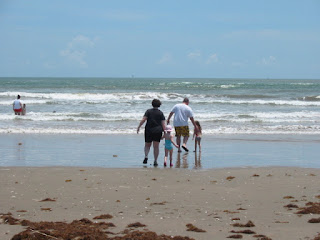 Texas is a good place to be from. I'm not from there, or anywhere at all. But that's ok. Texas will graft me in.

I love Texas. I can't even help it. It's like the state version of my brother with all his stories and laughter and nonsense and politics and jalapeno recipes. It is big and noisy and ADHD and feels just right when I need it.

Have I been to Texas? Baby, I'm still there in my head some days.
Posted by Sally Bridge at 10:23 PM