Five years ago today I got a phone call from an epileptologist. Now, most people don't want to get phone calls from people whose business cards read "pediatric epileptologist" and wear pinback buttons that have a red diagonal line through the word seizures. You just don't want that.

I had met this epileptologist two years before, after having met EEG technicians and anesthesiologists who drugged my daughter with halcyon before knocking her out for her MRI. "Say bye-bye to mama!" he had told London. And London giggled and waved at me. "Bye!"

It was cute but it wasn't.

She'd had her first seizure on Bixby's birthday, about two days after we brought Niles home from the hospital. I had also fallen down the stairs that day--about a week post-surgery myself from my 3rd c-section. I was covered in bruises and later on found out I had a broken tailbone, but London was lying next to me on the couch taking a nap and had a seizure. I didn't know what it was, exactly, it wasn't a generalized one, just a lot of clicking and chewing and one arm.

And then silence. Absolute total silence.

I figured she'd choked while sleeping and was now brain damaged somehow. That I sat next to her on the couch and didn't even notice she was dying.

The firemen standing in my living room: "Let's get this baby to the hospital!" which is probably the last thing a parent wants to hear. Ok, not the last. But it's in the top twenty or so.

Nobody had any answers. All I wanted, over the course of the next few months, was to stand inside London's childhood again instead of viewing it through a window.

I met this epileptologist and she was noncommittal. "If she were my child," she said, "I wouldn't medicate her."

I had gone armed with medical journal articles and the AAP's statement on single unprovoked seizures. I had gone in with my fists up in a defensive posture. And she offered me her hand. "She will let us know if she needs treatment."

I cried all the way home. London didn't understand.

We were so good, and then 22 months later, 22 borrowed months, she had her second on the Friday after Thanksgiving. I woke up to my sister-in-law screaming my name. I ran out of the room to London in her arms, choking on her own saliva, full generalized seizure.

God, I remember how perfect her eyebrows were. The shape of the bridge of her nose. Her cheekbones. She was beautiful. It took a seizure for me to see her all of a sudden. Oh little girl, think it over one time... 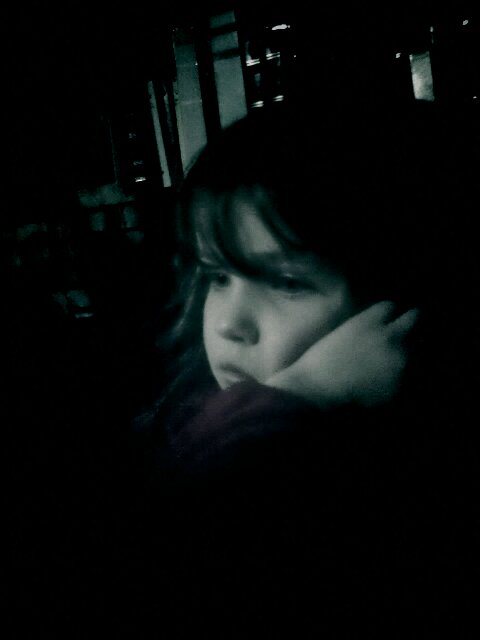 We called the epileptologist's office. I learned that my emergency is not their emergency. The scheduled me to bring London in to see her...in May.

I held my breath for almost 6 months, not able to truly engage or let myself enjoy what was happening around me. Because what if? What if they find something now? What if my family's seizure curse has come true here in my house? Jesus, I rolled the dice three times and had these children and of course I was rolling my own genetics each time. What if she has another? What if they want to medicate her? What if this is the beginning of the end?

We had the second EEG, sleep deprived for me and London, and the EEG technician was inscrutable. The first one had been clear that she'd seen nothing. This one scared me. If she'd seen something and then sent me home with this baby? How dare she.

The next week was 5 years ago today. The caller ID was from her office. I answered, and was surprised to hear her voice instead of a receptionist.

I've never spoken to her since. London's seizure risk is equal to any of us walking the earth now. It's been over 5 years since my daughter had her last seizure.

Her last seizure. It's reckless to even put those words together. But life is not worth living if it isn't a laughing full-hearted reckless cartwheel in the autumn leaves.