For Mother's Day: The One When Sally Tried to Build a Gingerbread House

I'm not much of a fan of mother's day. But I was thinking about it today and found this entry on my old South City Blog. Thought I'd repost it for y'all.

Twas 5 days before Christmas and all through the house the kids were so ramped up on sugar that they couldn't think of a rhyme here. 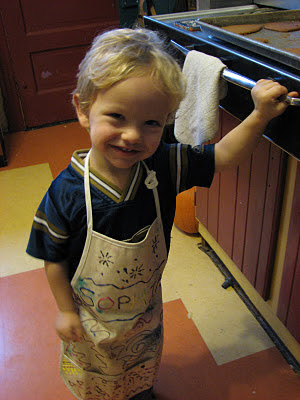 We made a gingerbread house. House-ish. This was my entire day. My entire day. I've made them before...my friend Mal even had his dad make me a set of cookie cutters for them. They're fun. For some reason, my kids think this is a tradition. I think we've made one since Brooklyn would be old enough to remember. I can't even find any photos. But it turned out ok. Mostly because I made it, with only two hands, and not with 6 extra hands helping me.

Today's started out good. I found a recipe that I think I've used before. I had this nagging feeling that I should google something, find something made for gingerbread houses, but I went with what I had in the cookbook. We cut out the shapes and baked them. While they cooled, we went to Target and bought cheap candy to decorate it with.

After we were home, we went to the kitchen and started the assembly. The girls were very excited. I was very nervous. I had memories of this not going well. My memories were correct: 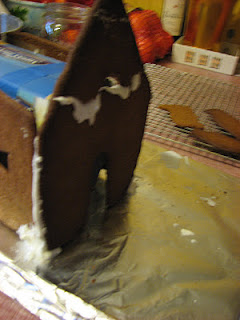 Look at that Irish engineering. Quality right there. 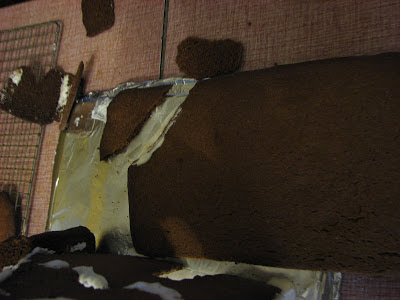 The front broke. The roof broke. I pasted them together with royal icing and kept going. Eventually, my frustration reached a peak and I told the girls to go turn something on TV for Niles and I'd call them when it was ready to decorate--they hadn't really grasped that the assembly would be difficult or that it would be first. 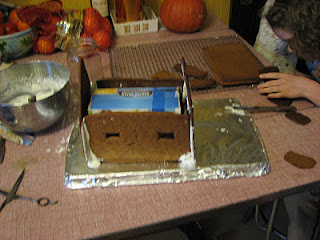 I calmed down, got the thing together, and called them in. And it was fun. Weird mints on the roof. A makeshift chimney. Mike&Ikes on the front of the house, with two weird penguin cookies holding up lollipops.

Daisy made a random front yard. Brooklyn designed a swingset and a playhouse for the side yard. I attached licorice whips to one side of the house, and then we went away for a little bit to let things dry before we added to it.

Something was wrong, I think, with my icing this time. It wasn't stiff enough. Or maybe it was the gingerbread itself, too crumbly. Some years things break, but they hold together with icing and are rock hard by the time January comes around and I think maybe we should throw that thing away.

We were upstairs chatting with Bix, who'd come home from work, I mean, literally, my whole day was gingerbread house, when London yelled for us: "House emergency!"

We ran downstairs. Our lovely gabled house had collapsed under the weight of its roof. Too many mints. The side walls were intact, and the front and back walls were fine up to the height of the side walls--the gables crumbled with one of the roof pieces. It. Was. A. Mess.

The girls were giggling--high on sugar, remember--but all I kept thinking was this was my whole day.

And I saw this vision. One of those two-paths-in-the-woods Frost moments. I could pick the whole thing up and throw it away, that was one path. Tell the girls we tried and maybe next year we could do it again. And I looked down that path and saw first our evening, awkward and probably disappointed, and then next year: "Nah, let's not make a house" and then never making one again.

And then the other path looked so clear. Laugh with them. Fix what you can. Let them play.

So it's more of an adobe-style structure. I told them maybe it was Christmas in the Desert. Fiona really wanted the coconut to be snow, though. With no chimney, we posted a notice for Santa on the roof and made a ladder (you can't really see it--it's on the other side of the house) out of candy canes for him to climb down. They had a good time. I did too. My jaw didn't hurt. I had London sweep the floor and Brooklyn carry the creation to the front hall. They couldn't care less that the gables broke and it didn't look like something Hansel and Gretel would try to eat. 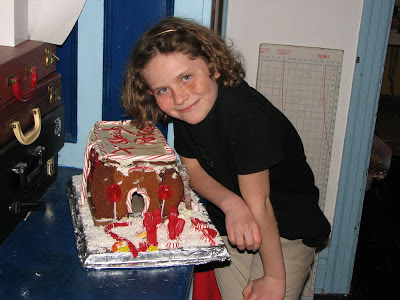 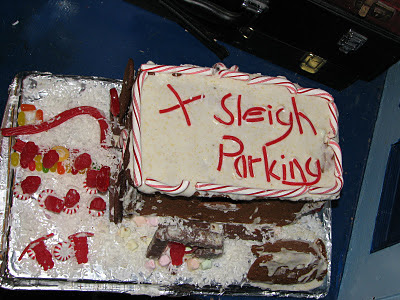 What do we learn from this? A few things.

First, next year? Get the right icing recipe and the right gingerbread recipe and don't overcook them or make them too thin.

Next, assemble it the night before while they are in bed and let them go at it in the morning when it is rock solid.

Finally, that gingerbread assembly isn't really in my job description, but good childhoods are. And I need to keep that in mind. Always. 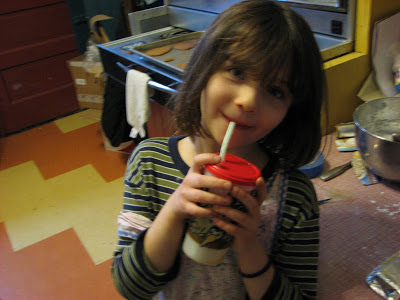