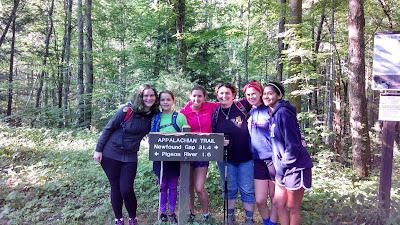 This week, my girl scout coleaders and I took five of our scouts to the Smoky Mountains. We stayed at Cosby Campground, just like we had 4 years ago when we made our first trip. And just like 4 years ago, we planned on a long day hike to Mt. Cammerer, which has a defunct fire tower, just off the Appalachian trail. This time, though, instead of doing an "up and back" hike, we had the two other adults drive me and the 5 girls to Davenport Gap and then we through-hiked back to the campsite. A total of just under 12 miles. Above is our morning picture. It is chilly down at the low point, my two coleaders snapping pictures and driving away. No way out but through. 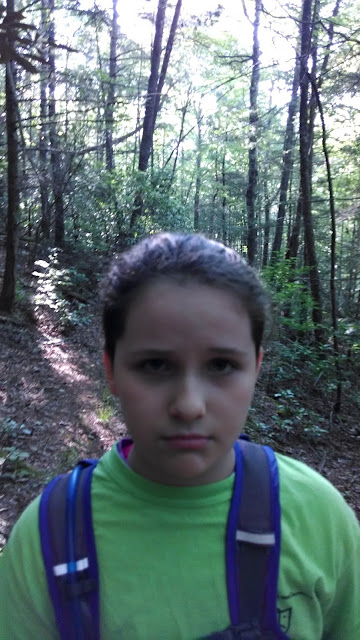 London tired more quickly than the other girls, being younger and having some asthma. I tired more quickly than the other girls, too, so we walked together more slowly. She wanted to turn back here, but we were only about a mile in and there was, again, no way out but through. She perked up later, folks, don't worry. The thing is, Davenport Gap up to Mt. Cammerer is a pretty steep climb. So we took a lot of breaks. The Appalachian Trail, too, is pretty solitary. It is both refreshing and terrifying that way. I love it like you love something wild. 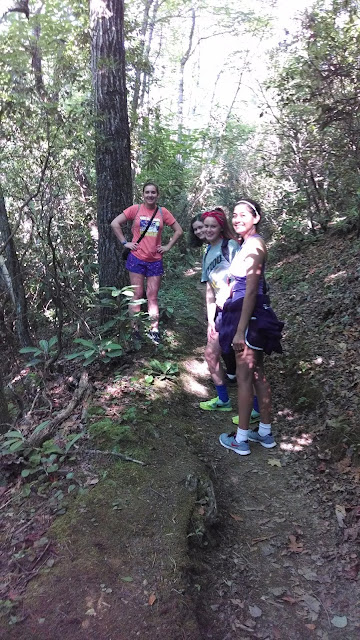 Here was our first official destination: one of the lean-to shelters for through-hikers, also named Davenport Gap. It was a few yards off the trail and gave us a chance to have a snack and a rest stop. 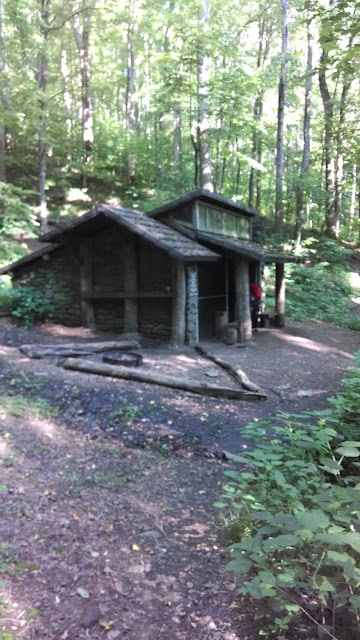 It is called the "Sheraton of the Smokies." The girls had a hard time imagining locking themselves in a cage for the night all alone in the world. I did too, but did not say. 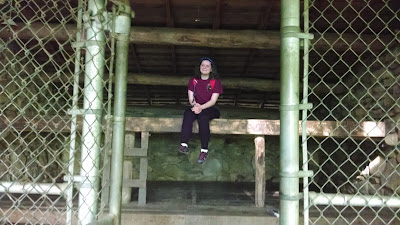 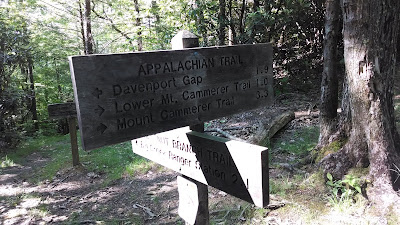 We stopped at the Chesnut Branch Trail intersection next. Note that's it's only been about 2 miles so far but it was essentially a two mile staircase. 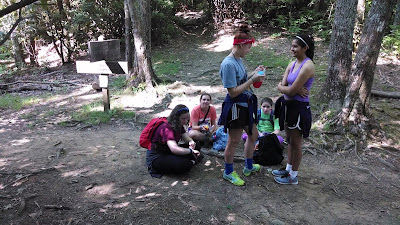 Between that break and the intersection of the Mt. Cammerer trail (the top), London and I fell behind the older girls. London was having a hard time and I will readily admit I was starting to as well. We started setting easy goals for ourselves: we would walk 100 steps and then stop, or we would walk to that place up ahead where the trail bends and then stop a second. This worked for a long time and then we met up with the girls one more time before the Mt. Cammerer Trail and they thought we had about a half mile to go. I thought it couldn't be that short, but they had fitbits and really thought it was true. London was heartened by this and although we all walked independently of each other, not in a mob, she was closer to them than to me. It got to the point that I no longer saw or heard them when I got to a bend in the trail. 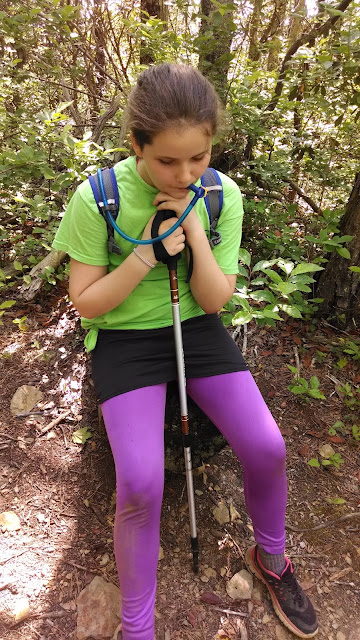 And then I got to the fourth round of this, below, and I sat down on a rock to switch out water and eat something. My brain was tired and started telling me lies (my brain tells me lies all the time, like "You can have just one Manhattan" or "It's fine to stay up another hour and then get some sleep"). The lies it was telling me were akin to the ones it told me when I was in labor with Brooklyn. How I could just rest here awhile and the next time a hiker came through I could send the girls a message and so on. I sat on that rock for about ten minutes listening to lies in my head. 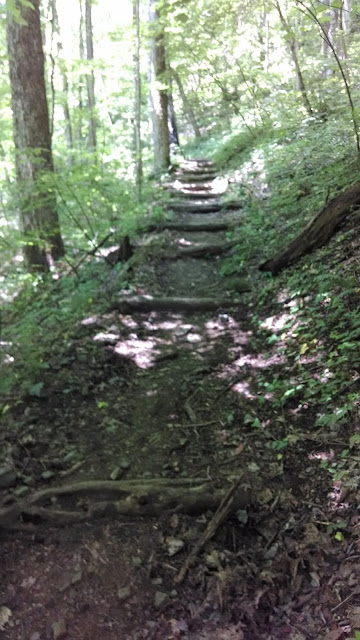 And then I heard thunder and saw past the glamour the forest creatures were placing upon me. My girls were going to get struck by lightning on the top of the mountain not knowing where I was and this couldn't happen. I walked up the remaining bit of staircase--I was only about a tenth of a mile away at that point!--and we hiked on to the mountaintop. I was actually in better shape than I was the last time I did this trail. I'm smiling, for one thing, and my hair isn't stuck to my head with sweat. So that's something. 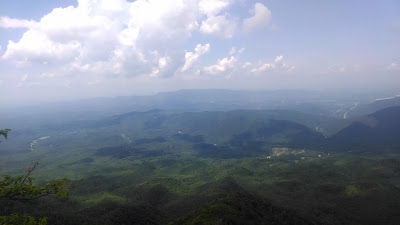 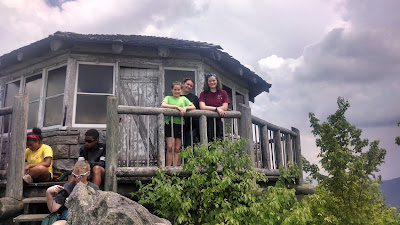 See the family there to the left? They departed a few minutes ahead of us, heading to the campground as well, and gave the message to the adults at the bottom that we were on the way.

I love this fire tower. I love all fire towers. They are one of my favorite things. No raindrops on roses. I like fire towers and good stories told well and pushing myself beyond my limits and handmade things and hugs and mountain views and signatures with flourishes and Vince Guaraldi music and the sound an arrow makes when it hits a target. This day was filled with things I love. And I felt so successful and the friends I was writing to  (I had cell service until the last mile of the day) were supportive and loving and awesome. 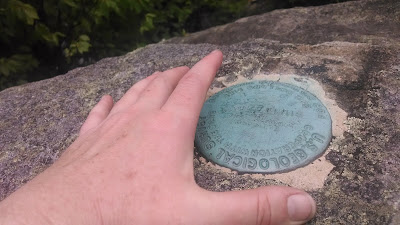 I love this place. All these secret places that are hard to get to. I cherish them. But there was more thunder and the family that was up there with us left ahead of us and we were full up on pictures and it was time to head out. I knew what was in front of me: .6 miles of up and down rolling hills, then one steep incline of about a tenth of a mile, and lastly a downhill slide all the way down to the campground. Like a five mile slide. We headed out to Low Gap, where we would leave this foot trail behind, this tiny artery of connectedness, down into our own capillary headed home. 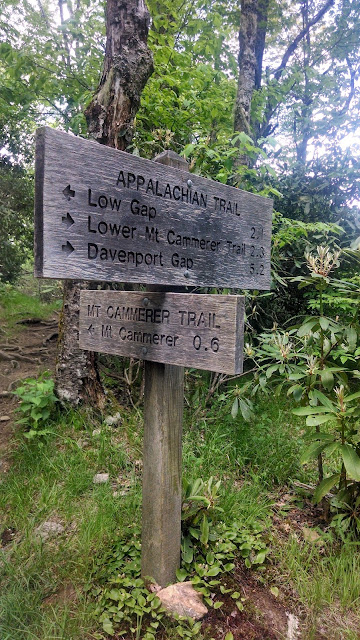 This section of the trail is not brutal. It is not rocky. There are few steps designed for NBA players. It is easy up and down. And we were headed down, which was even better. 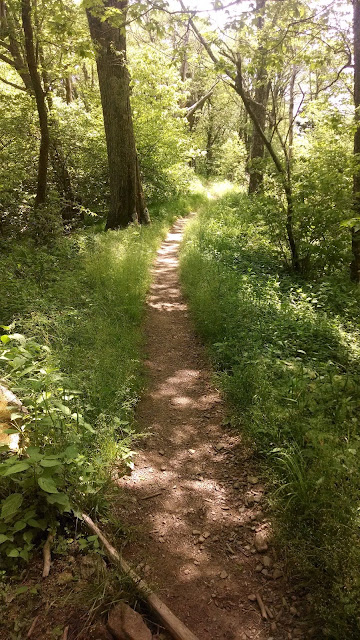 We got to Low Gap and look at my face. I'm pretty tired. Frankly, I don't look like myself. I'm down to about a quart of water but London has run out. So I give it to her, knowing I have an apple in my bag and it's downhill. It doesn't get my heartrate going. But I drink a lot of water when I exercise at all times, and at this point, I've drunk almost a gallon without having to stop and pee once. Same as last time. 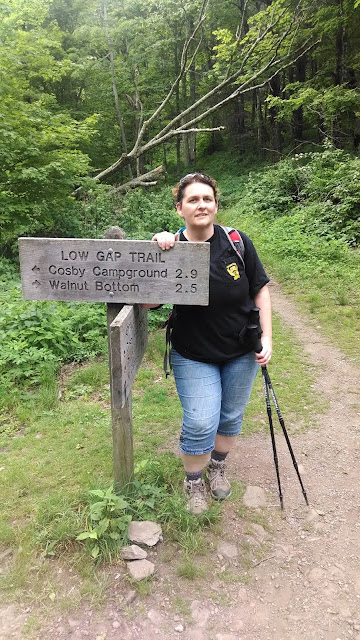 We got down that last 2.9, and our companions met us at a bridge at the very end. One of them, Aileen, took my bag off a bench where I'd set it down (they wanted to take an "after" picture, in which I look so wasted I'm not even posting it here). I told her not to touch it, that it was coated in sweat, but she just said she was taking me back to the campsite. The other leader was going to hang out with the girls at the creek for a minute. She brought me back to the campsite, alone, gave me gatorade and water, asked me questions about who I was and who she was and what day it was, and I was so obliterated I sat and cried and started to feel better. I had pushed myself and done it and made it down and everyone was happy and no one died. 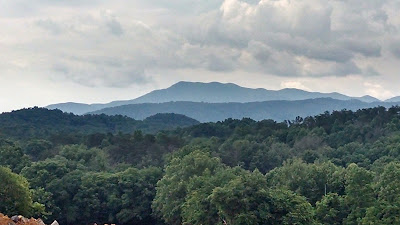 The first sharp corner on that mountain is Mt. Cammerer, where the tower is. We started on the left hand side, walked up that incline, across the top along three of those smaller peaks, and then down to Low Gap, which is hard to see in this photo. I showed this view the next day to one of the girls and she said, "WE ARE CRAZY!"

We probably are. But I'm glad I did it. Aileen had asked a ranger about what to do if we didn't come back, like what the protocol was, giving her the details on where they'd dropped us off and so forth. "Oh," the ranger replied. "I did that with my husband a few weeks ago and it took us a good 11 hours. You need to give them at least until dark."

We did it in 8 1/2 hours.  I guess we could have stayed at the tower longer, but the thunder? I don't know. It didn't feel like a forced march. But that look on my face at Low Gap feels like one. 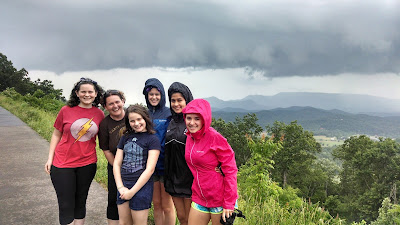 Here we are at a look out point the next day on the Foothills Parkway, after our rafting trip and everyone's had a nice shower. Cammerer is in the distance, a different angle, and we are happy.

The only way out is through.
Posted by Sally Bridge at 1:28 PM