Feathers. Feathers were everywhere. The ash tree across the street was dropping feathers. But that isn't something that ash trees commonly do, so it made London look up, just in time for the ash tree to drop something...bloodier.

It was a pigeon, or perhaps a mourning dove, in the process of being consumed by one damned happy raptor. 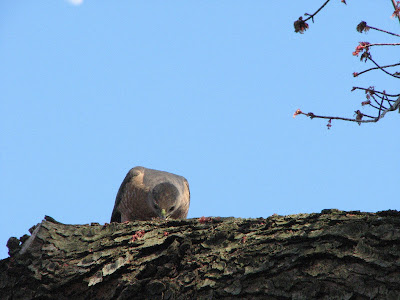 It wasn't a red tailed hawk. I knew that immediately. It was dark blue-gray on its back and its face just wasn't quite right. 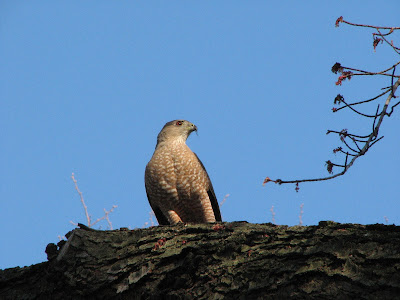 For a moment I wondered if we were looking at a falcon. I ran inside and got my camera, since it seemed like it would be feasting for a while. I took many photos of it while it dined, and then sat down to identify whatever this bird might be.

Cooper's Hawk, I decided. Its head wasn't right for a sharp-shinned hawk (a bird I saw for the first time just this month). The depictions of the face and size and coloring seemed definitive. Cooper's Hawk. I could like that bird.

It wasn't until a few days later that it struck me.

Cooper is an old English profession-surname. It means barrel maker. So does Troy's last name, the young man who had lived with us the summer before seeing this hawk, and who, at that point, had not been in contact with us for over a month after his girlfriend had made that impossible.

I thought about that Cooper's Hawk sitting in that tree on our street devouring some poor slow bird, happily enjoying itself before it flew on.

I hoped Troy was in a similar place. Not that I felt he had devoured us. I felt that he had taken what he needed from our place, and had flown.

In the end, wild creatures do what they need to in order to survive.