I'm not a sprinter. I'm just not fast enough to get across that finish line in a hurry. In 8th grade I was assigned to the middle distance running, and I took to it fair enough. I was reasonably ok at the 1/2 mile and even went to district finals, where I came in 5th and I was pretty proud of that. I pushed myself hard on that last straight away, I remember, passing two girls at the very end. My coach gave me the title of athlete of the week that week, which for the most part was 100% undeserved. But I think about that race sometimes, because I was up against my toughest competition and I didn't give up. I didn't. And I think that's what that coach saw.

So I started setting goals for myself. I would breastfeed today. I would nurse her one more time. I would nurse her tonight, this baby who would not sleep and would not be put down on her own. I would do it. I made it through 6 weeks this way, one nursing session at a time with my nipples on fire, I mean, when I say "on fire" I mean it felt like someone had lit a match and held it to my skin. I did not give up, even though everyone around me told me I could. I nursed that baby until she was old enough to negotiate her own weaning. Seriously. And I nursed two more.

Breastfeeding gave me the gift of perseverance.  I was a typical gifted child--if it wasn't easy, it wasn't worth doing because, frankly, lots of things were very easy. Might as well do one of those instead. Here I finally was, with something I really wanted to accomplish, with the odds against me, and I did it. I fucking did it. When I think back to those early weeks of motherhood and what I survived and accomplished, I just want to shake my fist in the air at everyone who thought I wouldn't, who thought I would give up. 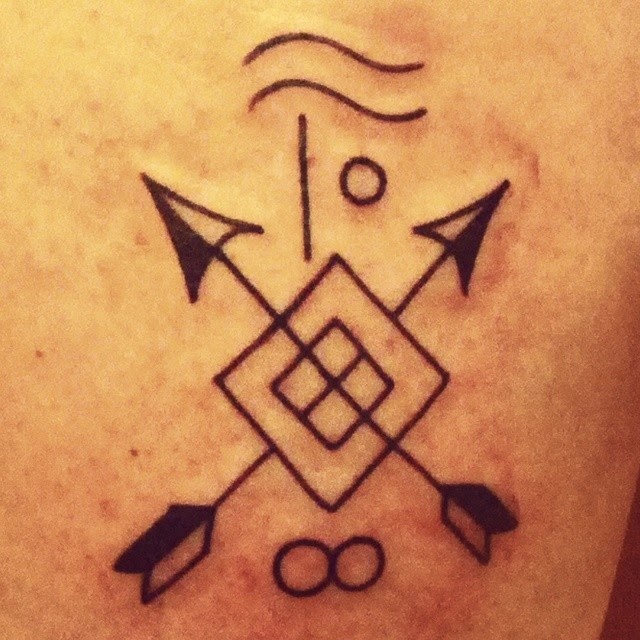 I don't give up so hard I had a man with a needle and ink inscribe it on my skin. It's the hobo sign for don't give up.