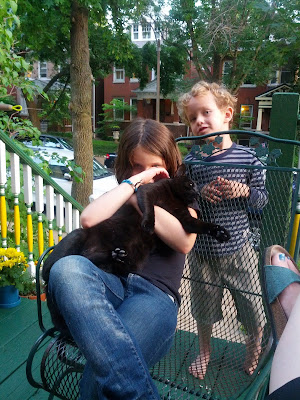 We moved to our little place in 1998. There was no porch sitting then. No stoop sitting either. We knew a total of 4 neighbors until the Crime Wave brought us all together. 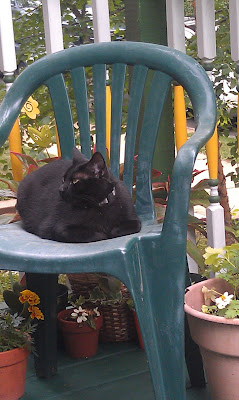 Then the stoop sitting began. Kids running up and down the block and playing and it's too hard to just stand around the whole time. So Zelda's steps or Gretchen's steps became the go-to stoop, in the center of the population of young children although not precisely in the center of the block. The top of our block is mostly 2-family flat buildings on the north side, and frankly, across the street from them are one-family buildings but not super-interactive dwellers in those structures. We are west-heavy.

Porch sitting became a more structured event as time went on. Evenings, Zelda and Travis would be on their porch and I was inevitably coming home from a meeting at church while they were out there. The summer Troy lived with us and they had their own houseguests, porch sitting took on a form of therapy. What I did at my kitchen table with other people, the porch-sitting friends did for me. Let me tease out truth and laugh at my own weakness and foibles and get to know this adult version of me.

Porch sitting also was an escape. Out on the porch in the heat of the day, no one else was going to bother me. I could listen to my grateful dead pandora station and read novel after novel while I drank iced coffee or lime water. Wifi means I could write or work or waste time.

One of the things about city living, or, more properly, about living in a neighborhood with alleys, is that the fronts of houses are welcoming to people. All the garage and trash and wires are in the back. The stoop is the public interaction contact location, and the porch is a welcoming into my life or your life in a slightly more private, but still quite public, way. People live here. Come talk to them. 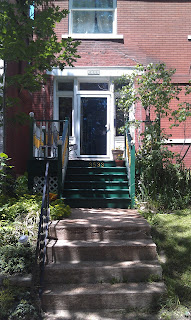 We are building a new porch this summer. The old one is a deck, really--no roof, so it's useless for porch sitting in the rain. Our house was a boarding house for a good chunk of its existence and slowly fell into neglect--sometime in the late 90s the porch started falling away from the house and the owner's brother tore it off and built what's there now. It has about 2 good months left in it before it falls down itself of its own accord. Time for new. It will be a family affair--Bix's dad is a contractor and has us loosely on his schedule. 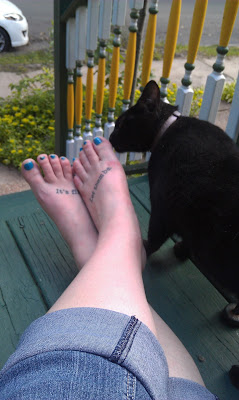 I cannot wait; I've wanted a new porch since, oh, 1998. I almost didn't buy our house due to the current porch. Luckily I--or rather our awesome real estate agent--could see past the idiosyncracies, neglect, poor decisions, and haphazard repairs to a welcoming sturdy structure in a beautiful place.


Here's hoping the people I encounter can do the same with me.

So I'm going to do some porch sitting.