It was a frugal Christmas this year. I have definitely been a Martha this year instead of a Mary--and trust me, I'm usually a Mary--but I am worried about many things. There's no alleviating this worry, either, and trust me, I've tried. But one of the things I worked hard to do this year was make Christmas happen on a tight budget without my kids noticing.

Part of the plan was working through my stash, and remembering how to do things and doing them as well as I could for others. I made table runners out of scrap fabrics for teacher gifts. I worked some copper foil stained glass for a couple other folks on my list. I trimmed down the list, I focused on my kids, but the people I could make something for, I did.

I had these blocks I'd found at an antique mall. They were in two ziploc bags in my cedar chest. I'd picked them up years ago with the hopes of putting them together and quilting it. This year was my chance. I got them out and examined them. Almost all cotton, shirt fabrics, mostly from the 50s and 60s. About 180 blocks, each with a solid on one edge.

They're called Rail Fence blocks. It's a simple beginner's pattern. I'm not sure why this set caught my eye, frankly, except that they were squared up and well sewn. And I don't like seeing blocks and quilt tops unfinished, languishing in flea markets and antique shops. 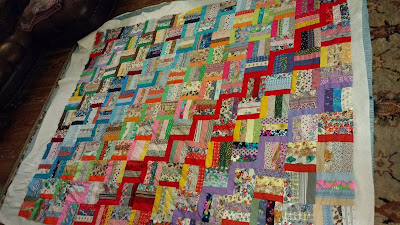 I started laying them out and realized that the anonymous woman who made them had a plan. They were probably days from being a quilt top when she--what? Set it aside? Got a job and ran out of time? Died?

The fabric had to be collected over a decade, unless she was a professional seamstress and her seams aren't that precise. All the blouses and little girls' skirts and dresses, the scraps in cardboard boxes waiting to be quilt blocks. Then one day sitting down and cutting out the rectangles and assembling them with an amazing eye for color and tone. For such a simple block design, this woman produced a work of art.

I was texting a friend while I laid it out and pinned it for quilting. It was a gift for my sister, who appreciates vintage fabric and loves quilts and afghans. I was telling Maggie about this anonymous woman who left these pieces behind. How satisfying it felt to put them together for her now, make them into something beautiful, which was obviously her intention, and give the finished product to someone who would love it.

These weren't broken--they were unfinished. So it's a different impulse than to take unwanted or broken things and make them good again. This is more a desire to bring something to what it always should have been if it hadn't been waylaid.

If it hadn't languished in a dusty antique shop.

If he'd had better teachers.

If she'd just let go of the grudge.

If we had enough love.

Bring something to the light. To fruition.

It's not too late to be what you might have been.