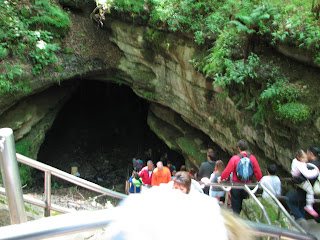 This past weekend we went to Mammoth Cave National Park. There are lots of facts and history and whatnot. But here are some pictures! Above, the historic entrance. It's a big old cave, 400+ miles of cave in approximately a 49 square mile area of Kentucky. 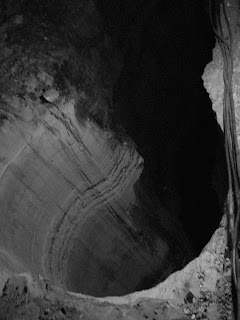 There are several of these terrifying holes on the tour we took. Interestingly terrifying of course. Brooklyn was not amused. 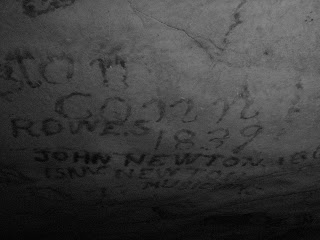 In the 19th century, people signed their names to the ceiling of the cave, using a candle flame. Patience. 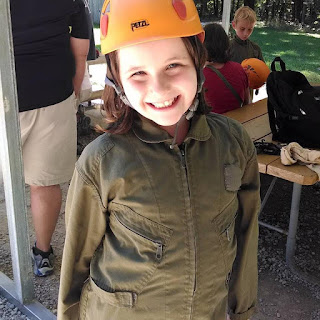 London went on a wild cave tour with other kids her age. They dressed her in coveralls and helmets with lamps. She had a great time. Above is the before picture. Below, the after picture. But she doesn't look as exhausted as I thought she would be! 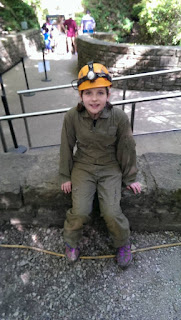 While she caved, Brooklyn and I did a six and a half mile hike. We earned a patch for this, so we took a selfie at the furthest point from the trailhead (it was a loop). We will pretty much do anything for an embroidered patch. Girl Scouts trained us well. I should mention here that running has gotten me into such better shape. Yikes. 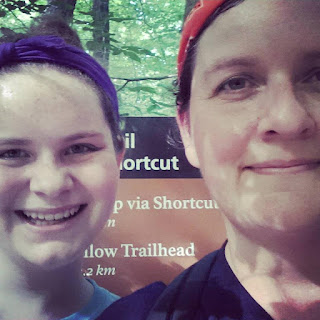 And below is the rat snake Brooklyn almost stepped on. Yeah. It was a little bit frightening, that moment. I tried to get the camera out in time to take the photo on the trail but instead, of course, I tracked it a bit off the path. 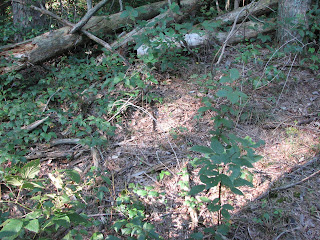 What you don't see when I tripped over the root and fell about a mile and a half in.  Like all the way down. Like sliding into home plate. I have some lovely bruises. As I was falling, I had that millisecond to think, and I thought, oh, I'll catch myself. No problem. Easy. Nope, not going to make it, going to fall. Falling right now. Don't catch yourself with your wrist bent, Bridgett, slide, slide, slide....and I did. Whee.

So I was exceptionally sore. But it was good. And I earned a patch. Did I mention the patch?

We took another cave tour this morning, in a part of the cave that is still forming--the cave is limestone, but in almost all of Mammoth Cave, the top of the cave has a sandstone roof protecting it from further water seepage. At one end, though, the cave extends past the sandstone and formations like stalactites form. And cave bacon. Who doesn't like cave bacon? 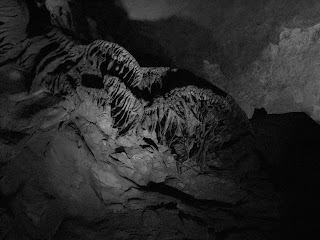 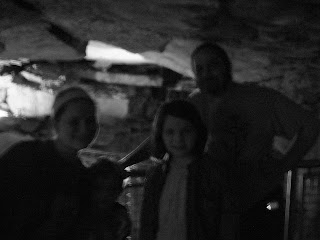 They had to be very still for this to work. It sort of worked. We were there. I promise. It was good.

The weird thing? The clientele wasn't the typical National Park Junkies we are used to spending time near. People seemed far more passive, like they expected to be entertained. Bix thought perhaps, because the one major thing to do in the park was cave tours, we were noticing more of the "drive to the national park and look at the vista" kind of folks than we usually encounter. Most visitors were from quite nearby. They weren't bad folks. They were just, well, different than the usual. For instance: we approached the rangers asking for hikes, and they pulled out the brochure for paved walks near the visitor center. We said maybe something longer than that, and she pointed out that you could do both of them in 30 minutes. Finally, I asked her if there were any fire towers (there weren't) and described some of the hikes we've done in the past. She produced the patch and got out a back country map. Then, when we were on the hike, Brooklyn and I, and we saw 6 other hikers. There were 3 cars in the trailhead lot. We've been to trailheads out west that were filled past capacity.

So we're going to go back in a few years and test Bix's theory by taking the more extensive tours (6 hours, for instance).

How's that for a weekend trip that makes me feel superior to my fellow visitors? It wouldn't have struck me, honestly, if it hadn't been so danged obvious that they thought this was a tourist cave destination. My favorite quote, outside the national park store: "They call this a GIFT SHOP? Are they out of their minds?"
Posted by Sally Bridge at 8:15 PM