Over the 4th of July weekend, we went to New Harmony, Indiana. It's a former utopian colony. Actually, it's the home of two former utopian colonies. The first were the Harmonists, a German Christian group led by Fr. Rapp, who wasn't a priest, but their leader. They left Germany for the New World, settled in Harmony, Pennsylvania. There were too many distractions there, though, so they moved to New Harmony. They stayed in Indiana for 10 years, long enough to build a town and church and groves and so forth. And then they packed up and went back to Pennsylvania to form the town of Economy, where they lived until they died out.

New Harmony was founded in 1814. The Harmonists stayed until 1824 and then sold the town to Robert Owens, a Scottish industrialist who filled the town with scientists and forward-thinking social experimenters. Women could own property and wore the same peasant-style pants and blouse as the men. The schools they ran according to Pestalozzian methods, which struck a chord with me because my parents live on Pestalozzi Street! He was a forerunner of Montessori, influencing Froebel and then with him, Susan Blow. Kindergarten was taught at New Harmony, and the first free public library in Indiana (the Working Man's Institute) was established. Scientists surveyed the animals and plants and geology of the area. Some went on to help found the Smithsonian. The Owens group left New Harmony in a trickle--not all at once like the Harmonists--and the after effects were still visible into the 1860s.

Now it is a small town. Luckily, an oil baron's daughter married into the Owens clan and decided that philanthropy fit her well, and she saved many of the buildings. But she also brought in modern sculptors to create public religious art. There are two labyrinths in town--one is Harmonist and one is based on the Chartes Cathedral labyrinth. The town has a tiny main street with a great ice cream shop. Everyone in town rides around on golf carts.

I loved it. Bix did too. And our kids? They were oddly agreeable and peaceful. It was lovely. Pictures follow. 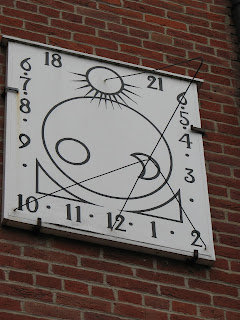 This is a Harmonist Sundial. Below, the Harmonist cemetery. Note there are no headstones. Equal in life, equal in death. But once the Owen community started to drift apart, Harmonists traveled back to Indiana, dismantled their huge brick church, and built a wall around the cemetery. There are also pre-columbian mounds inside the cemetery. It's eerily peaceful and lovely in its simplicity. 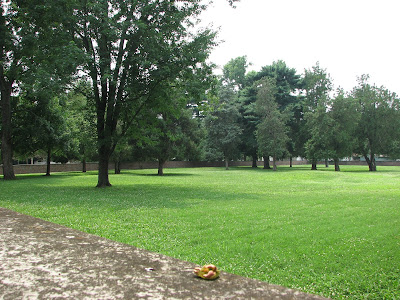 Below, what is left of the church that became the wall. The flower at the top has the inscription "Micha 4v5" and Brooklyn figured out that it was Micah 4:5, which reads, "Though all the peoples walk, each in the name of its god, We will walk in the name of the LORD, our God, forever and ever." 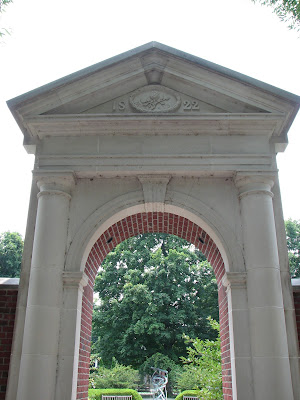 Below, a Harmonist house. They were all 2 stories and an attic, measuring 20x30. Some were wood, some brick. They were lovely. 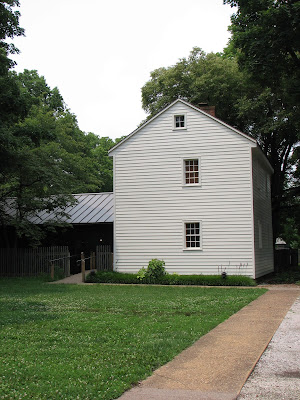 One of the labyrinths is done in polished and unpolished granite, with a fountain on one side. Carved in the stone next to the fountain is written "Solvitur Ambulando" which I was so hoping meant something interesting, and it does. I was so happy to discover: "It is solved by walking." 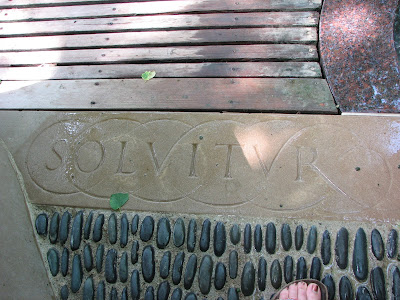 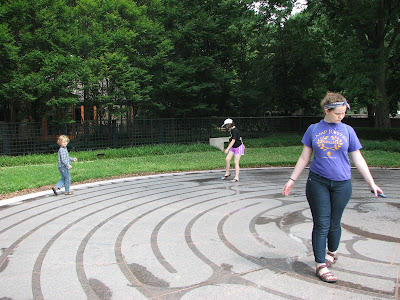 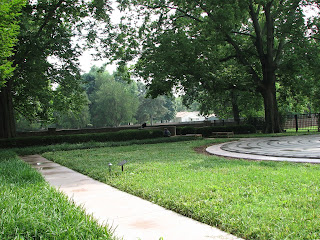 Here are a few photos from the roofless church. It was kind of hard to explain or get a handle on. So I liked it a lot: 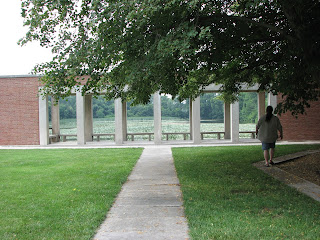 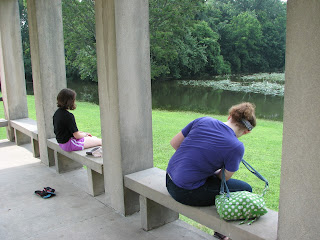 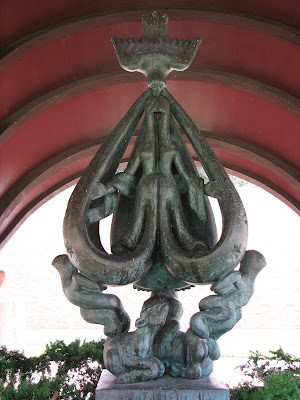 Below, a modernist representation of the Pieta. That's another head emerging from the chest of the standing figure. 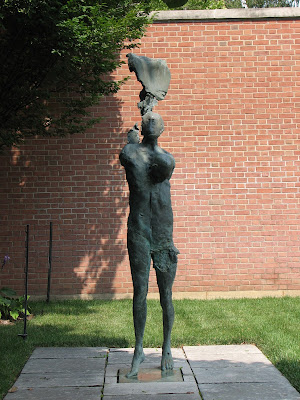 Inside the doorway of the old church is this fountain: 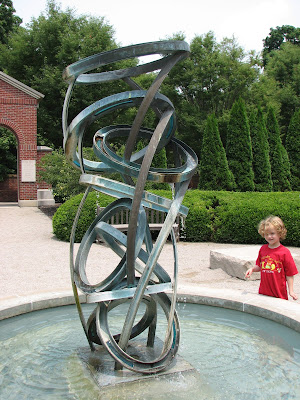 In yet another public garden was this sign: "raise the stone and you shall find me, split the wood and I am there." Ooh. 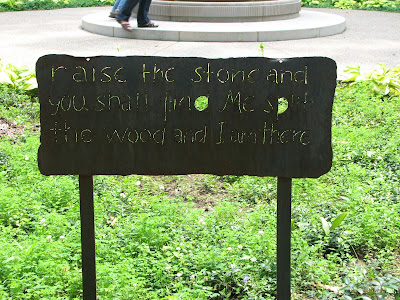 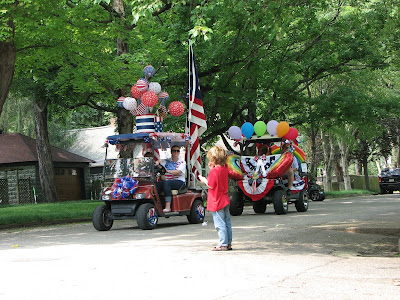 And...4th of July isn't complete without a parade. A golf cart parade....

And kids: look at them over there by a fountain. That was the 4th fountain they hung out at together. 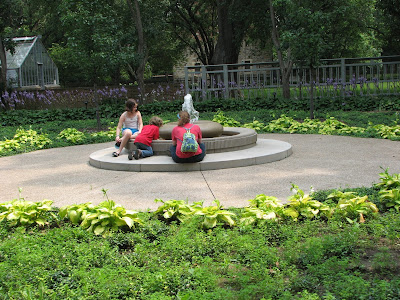 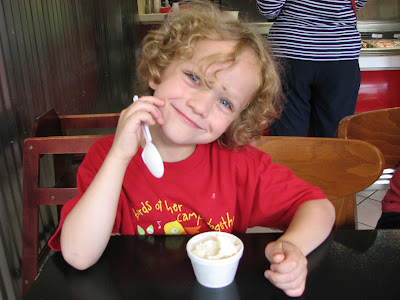